Wordle is going viral these days on social media. The game made by Josh Wardle allows players to try six times to guess a five-letter word, with feedback given for each guess in the form of colored tiles indicating when letters match or occupy the correct position.

We have seen many Wordle variants for languages that use the Latin script, such as the Spanish Wordle, French Wordle, and German Wordle. However, for non-alphabetic languages like Chinese, a simple adaptation of the English Wordle’s rules just won’t work.

In China, where most people are more familiar with Chinese characters, or hanzi, Wordle fans have invented a localized version of Wordle with a very clever name: Handle. (And you guessed it right, it is a combination of hanzi and Wordle.)

Like Wordle, Handle allows players to try 10 times to guess a four-character Chinese idiom, or chengyu. While English Wordle uses letters and their positions to indicate whether players have made the correct guess, Handle uses pinyin, a romanization system for Simplified Chinese in mainland China, to give players feedback.

After every guess in Handle, each hanzi and their pinyin is marked as either cyan, orange, or gray: cyan indicates the hanzi or the pinyin partial (the initial or the final) is correct and in the correct position, orange means that it is in the answer but not in the right position, while gray indicates it is not in the answer at all. Of course, each game is given a hint to indicate one of the character’s pinyin or hanzi (depending on how hard you want the game to be).

Here is an example of how Handle is successfully played. 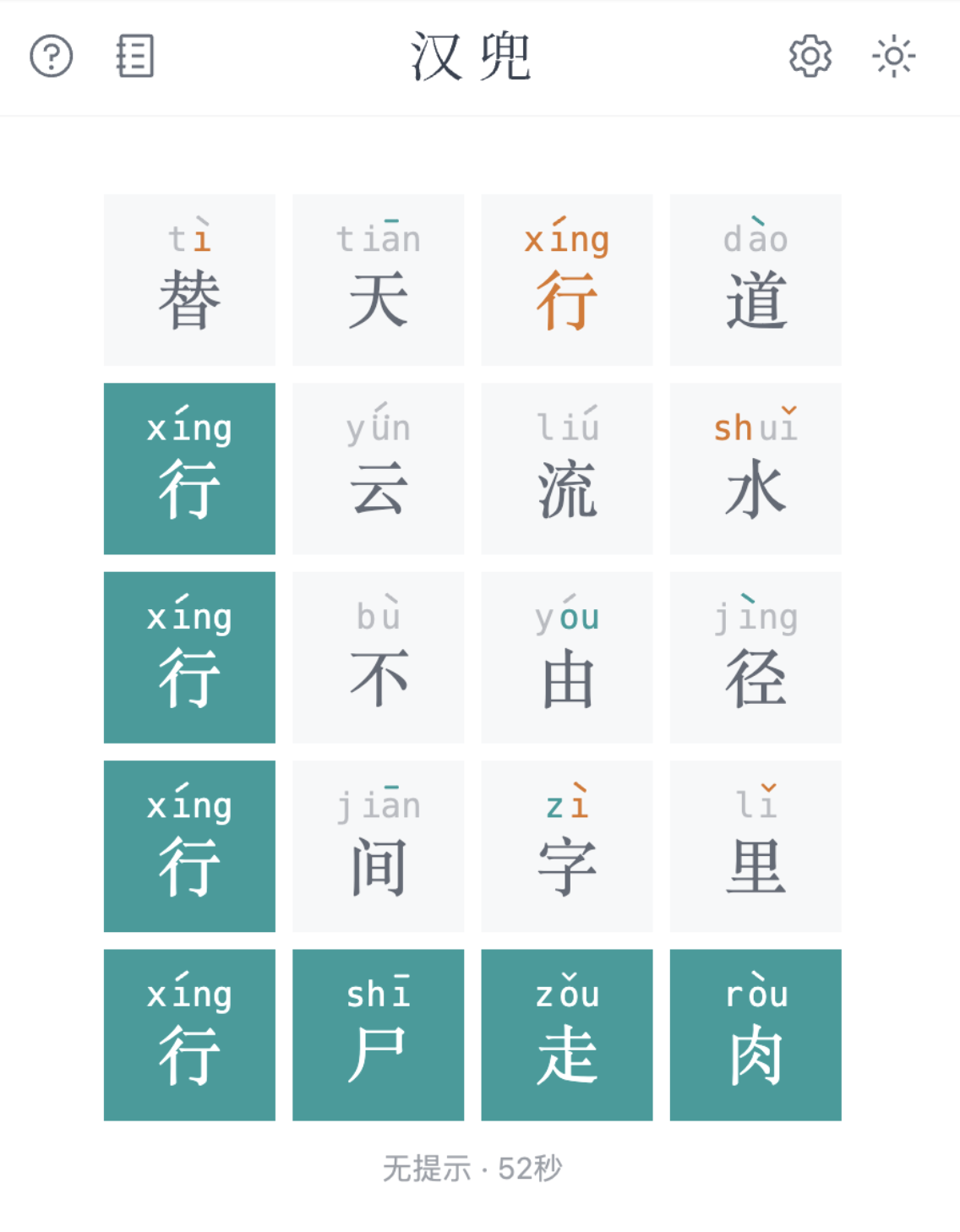 The Handle helper: Your second brain

Of all magics that were used to solve Wordle, I was most impressed by Grant Sanderson (or 3Blue1Brown as he is known on YouTube), who provided an elegant and delightful way to solve Wordle using information theory.

Today, I’d like to write about how I solved Handle (the Chinese Wordle) using a different approach – knowledge graph. The idea behind the solution is that I believe a knowledge graph is the best way to mimic how we search for the final answer in our minds in games like Wordle and Handle.

Imagining a knowledge graph of five-letter words and letters that are connected using edges representing their relations (contain or made up of), each try in the game will give you some clues (hopefully!) about how to approach the hidden answer in the network of words and letters.

The same theory applies to Handle. We can also create a knowledge graph of chengyu (four-character Chinese idiom) and Chinese characters that are connected using edges to represent their relations.

Before we dive into how to solve Handle using a knowledge graph, I’d like to go through how to play Handle without the help of computers.

I have mentioned that Handle uses pinyin and hanzi to give players feedback. But pinyin is complicated, it consists of initials (声母; shēngmǔ), finals (韵母; yùnmǔ), and one in four tones. For example, the pinyin of the hanzi "声" (sheng1) is made up of the initial "sh" and the final "eng," and its tone is the first tone (tone 1).

For each guess, each character may have the correct initial, but the wrong final. Sometimes if you are guessing the initials and finals right, the tone might be wrong. For example, the pinyin is "sheng1" could be “声” (sound) but the pinyin "sheng4" could be “圣” (sacred).

Let’s see what it is like to play Handle: 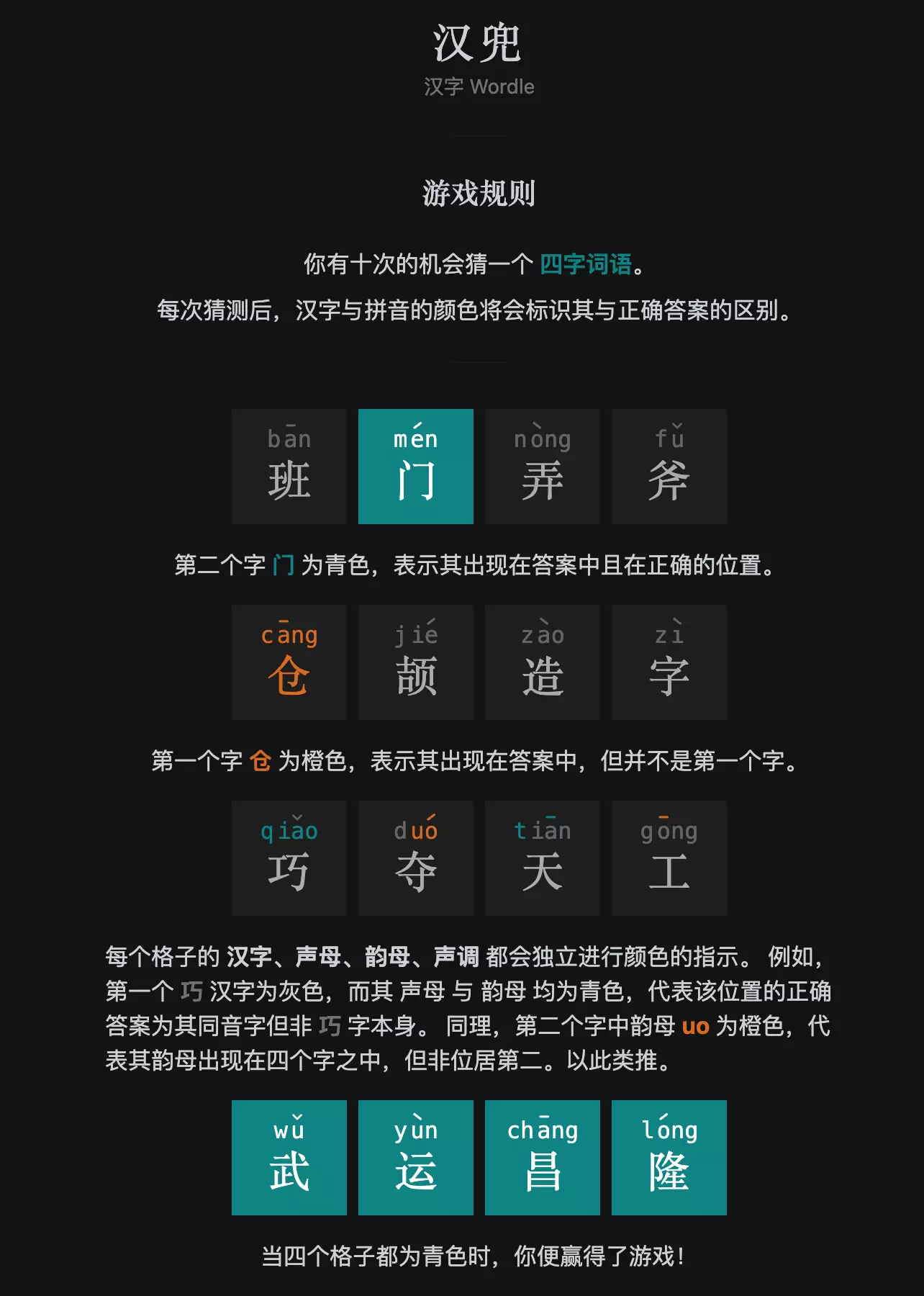 I’m not going to create a fully automated Handle solver. That will just kill the fun of the game. Instead, I’m going to make a Handle helper, which I call a second brain, that will help people reach the hidden four-character idiom.

In Handle(Chinese), it’s almost impossible to search based on hints like tones and initials of pinyin in search engines, because most Chinese webpages are simply made of hanzi, not their pinyin, or tones.

As I mentioned, the key idea of this helper is that it should work as a second brain to help people locate the answer in the sea of Chinese idioms, which are estimated to have an amount of up to 20,000. Then the question is: How does our brain work while handling the knowledge of Handle (And yes, pun intended 😏)?

Thus, why not do it in a graph/neural-network way? And here we go, let’s create a knowledge graph of Chinese idioms and see how it goes with the Handle game.

What is a knowledge graph?

Simply put, the Knowledge Graph is a network of connected relationships between entities. It was originally proposed by Google and was used to answer search queries that are only possible to be answered via knowledge-based reasoning, rather than the inverted indexing of web pages. For example: “How many championships have the Houston Rockets won?” and “Who was married to Elvis Presley? ”

How to build a knowledge graph for Handle?

A knowledge graph is composed of entities (vertices) and relationships (edges), and a graph database management system can be easily used to index, query, and explore the knowledge graph.

Setting up the Handle knowledge graph

The modeling of a Handle knowledge graph is actually quite straightforward: I only need to index entities in the game as vertices and connect them using their relationships.

Oftentimes, you will have to come back to optimize the schema after playing with the knowledge graph afterward. But the main principle is to not over-design it: Just do it in an intuitive way.

For my practice, the Handle knowledge graph has the following types of vertices:

There are three types of edges:

Of course, each type of vertex and edge will have its own properties. For example, the vertex "idiom" will have a VID, which is a unique identifier in NebulaGraph; its pinyin represented by initials, finals, and tone numbers (like the pinyin "sheng4" mentioned above).

The following sketch is a rough representation of the schema of the Handle knowledge graph. 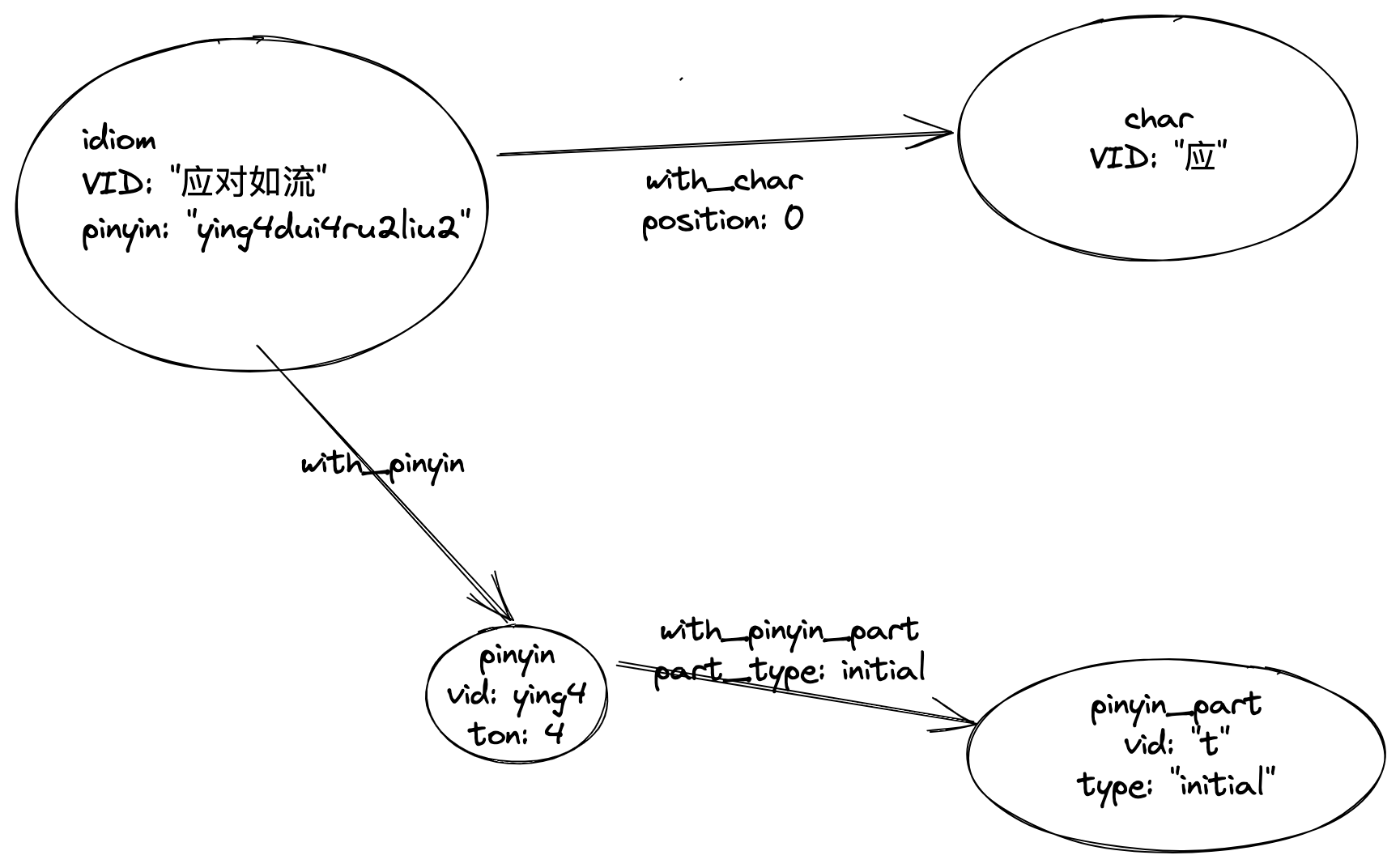 After modeling, what we need to do is to collect, clean, and index the data.

I extracted the universal set of idioms used in Handle from the game’s Github repo. I used PyPinyin, an open-source Python library, to convert idioms into their pinyin. PyPinyin can also be used to split pinyin entities into their initials and finals.

Here is the Github repo for the project: https://github.com/wey-gu/chinese-graph

You can use Nebula-UP to deploy NebulaGraph using only one line of code.

With all the setup ready, let’s start playing the game with our second brain.

Now let’s visit the Handle game. Say we use the idiom "爱憎分明" as our first guess. After typing the idiom, we get our first batch of hints:

Not bad, now we have a few informative hints:

After inputting those queries into the NebulaGraph instance that runs our Handle knowledge graph, now we have seven alternative idioms that can be used in the second guess!

Let’s give the idiom "惊世骇俗" a try. 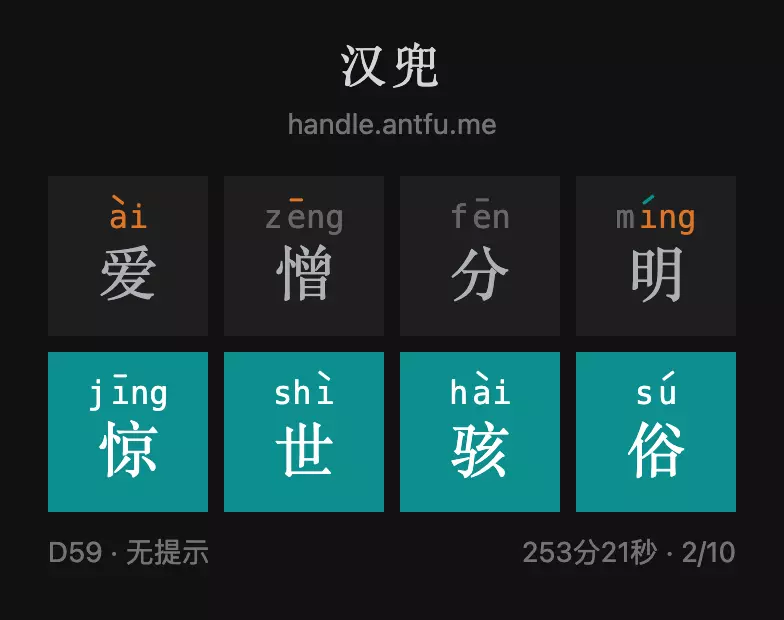 And here we go, we got the final answer. It is "惊世骇俗".

My first guess was "一言为定". And we got the following feedback:

This can be translated into the following nGQL statements:

Here is what we get: 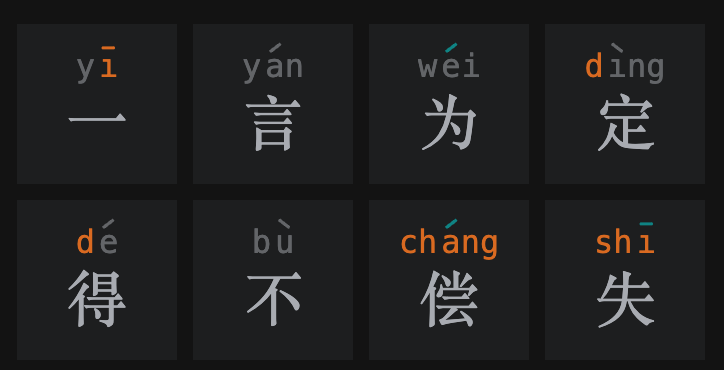 Again, let’s try to translate the clues into nGQL:

We got three possible results:

And bingo! We’ve got it. 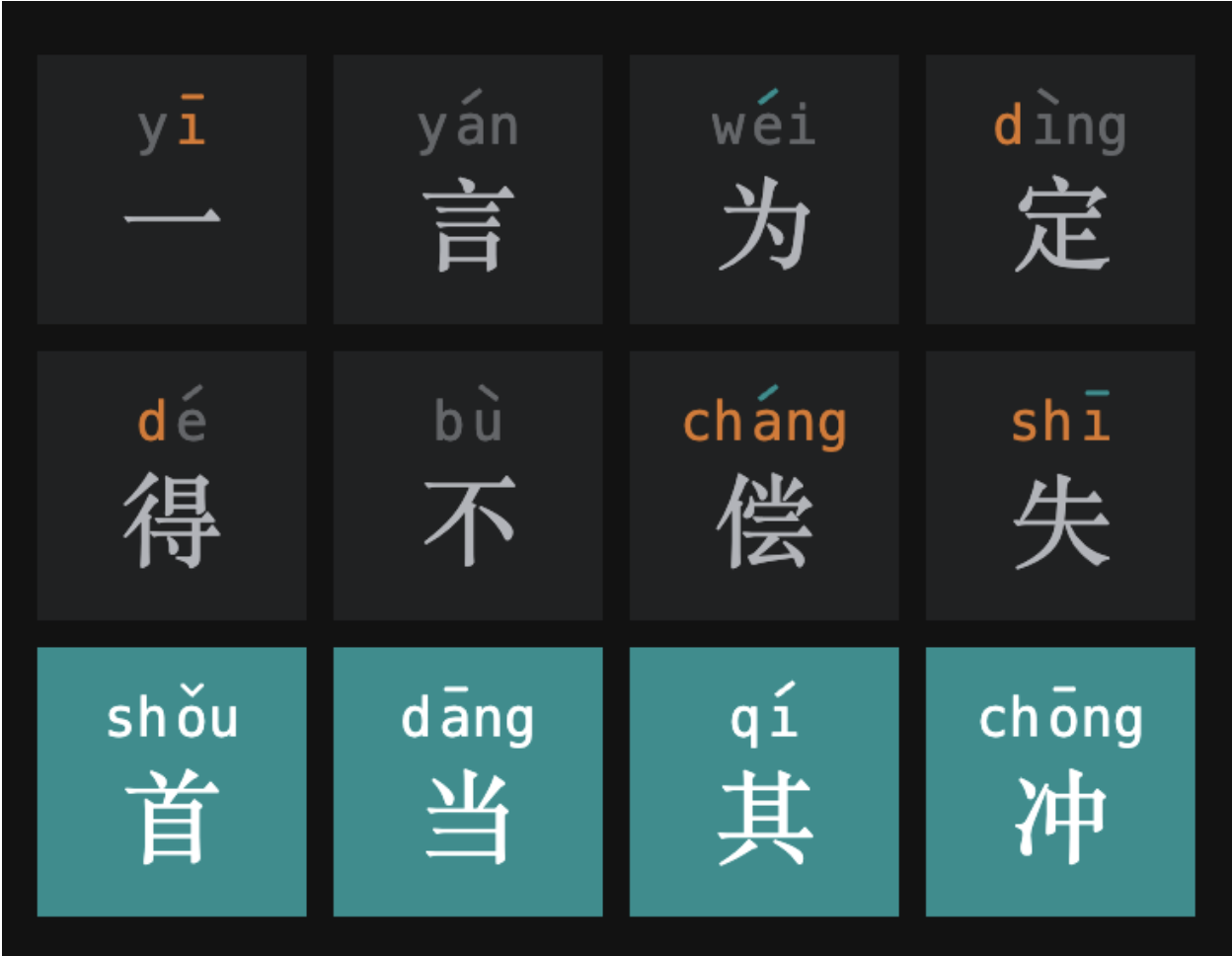 If you happen to be interested in graph databases, you can check out the NebulaGraph project on Github.

NebulaGraph will soon roll out a Visual Builder to enable users to generate nGQL queries in a drag and drop interface. With the no-code tool, you can explore the Handle knowledge graph more easily if you aren’t already familiar with graph query languages like nGQL. If you are interested in the new feature, please join our Slack channel to get alerted when it’s ready. 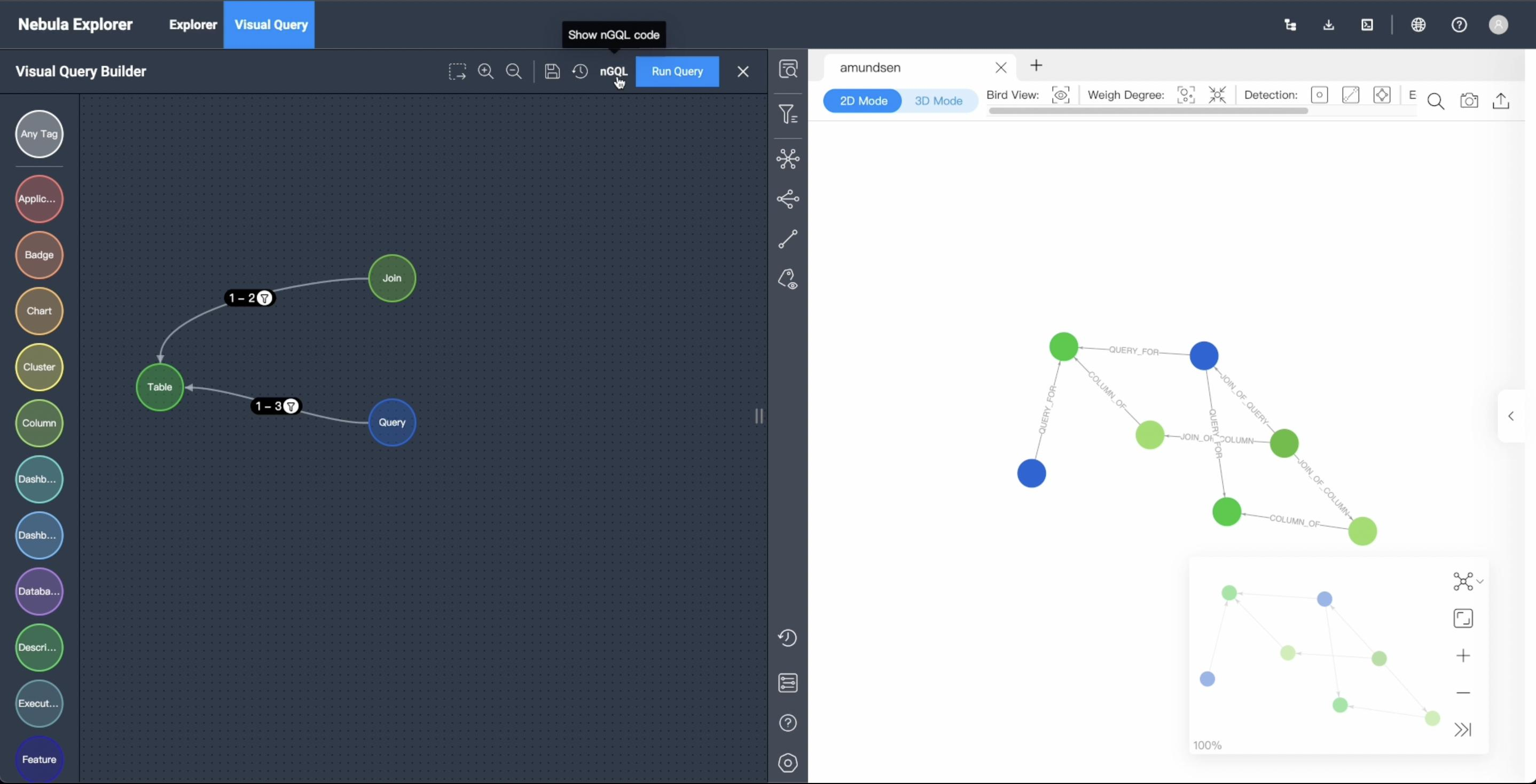 Also, an easier way to try NebulaGraph out is its fully managed service in the cloud NebulaGraph is now available on Microsoft’s Azure Marketplace. The service is currently in a beta period and is offering a generous 70% off for beta users. Sign up here to get the offer if you are interested!

Wey Gu is the Developer Advocate of NebulaGraph. He is passionate about spreading the graph technology to the developer community and trying his best to make distributed graph database more accessible. Follow him on Twitter or visit his blog for more fun stuff.