NebulaGraph 2.0 has changed a lot over its releases. In the storage architecture design, the encoding format has been changed, which has the most significant impact on its users. In NebulaGraph, data is stored as KV-pairs in RocksDB. This article covers several issues such as the differences between the old and new encoding formats and why the format must be changed.

Let's start with a brief review of the encoding format in NebulaGraph 1.0. For those who are not familiar with it, I recommend that they read this post: An Introduction to NebulaGraph's Storage Engine. In NebulaGraph 1.0, the vertex IDs can only be represented by values of the int type, so all VertexIDs are stored in int64.

For a VertexID, its corresponding PartID is obtained after hash, so a vertex and all its incoming and outgoing edges, of which only the IDs of the sourcing vertices are hash processed, are mapped in the same partition. It should be noted that in NebulaGraph 1.0, the first bytes of a vertex and an edge are of the same Type. That is, for a vertex, all its tags are not stored physically contiguously. They may be stored as shown in the following figure. For the vertex named src, its three tags (tag1, tag2, and tag3) may actually be separated by edges. 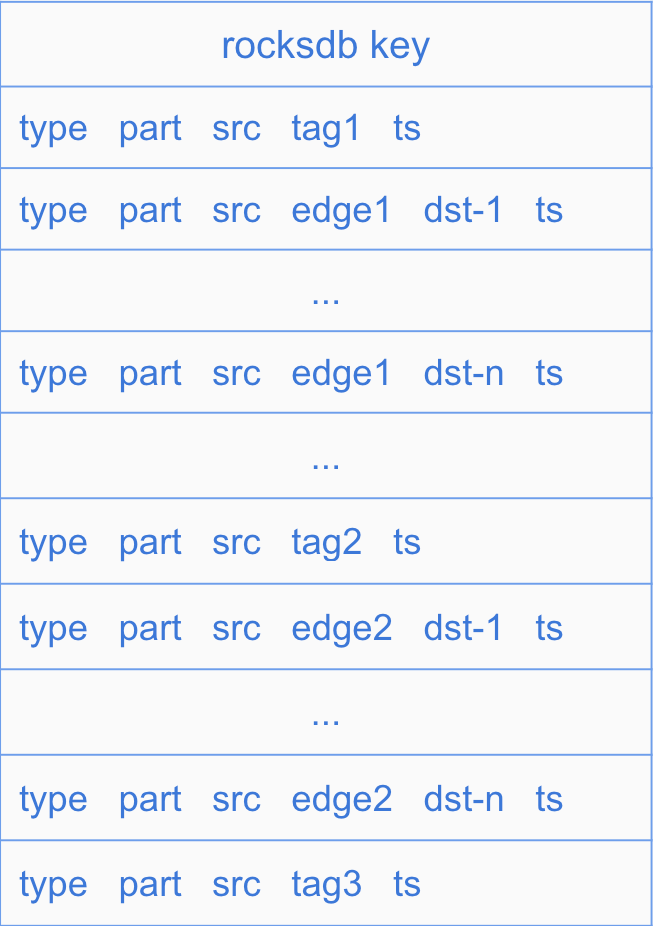 Such a key format can meet most requirements for operations on data in NebulaGraph 1.0. For example, when the prefix is specified, data can be retrieved by the FETCH and the GO manipulations.

In the releases prior to the 2.0 GA release, the encoding format in the underlying storage layer was actually the same as that in NebulaGraph 1.0. For an integer VertexID, it is stored in exactly the same format as in 1.0. However, for a string VertexID, it is changed from int64, which occupies 8 bytes, to FIXED_STRING of a fixed length which needs to be specified by users when they run CREATE SPACE. If a VertexID is shorter than the specified length, the system will automatically pad it with \0. For a VertexID that exceeds the specified length, the system will report an error directly.

In the 2.0 GA release, several changes were made to the underlying storage encoding format. Therefore, to upgrade NebulaGraph to this release, a specific tool is necessary. This tool converts the data from the old format to the new format. The following figures show the key formats implemented in the 2.0 GA release.

Key Format Comparison between NebulaGraph 1.0 and 2.0

As shown in the preceding figures, some major changes are made:

Why these changes are made? Here are the main reasons:

In addition to the changes made to the key format of vertices and edges, the format of the indexes has actually changed.

Why these changes? The first reason is that with NULL support in NebulaGraph 2.0, the index semantics must be changed accordingly. The second one is that in NebulaGraph 1.0, the string fields in indexes are actually treated as strings of variable length. Therefore, whenever an index on a string field is used in a LOOKUP statement, only an equivalent query is used. In NebulaGraph 2.0, however, FIXED_STRING is applied to the string fields for indexes and the data VertexID, and for the LOOKUP statements, range scanning is supported for the string type index. For example, LOOKUP ON index1 WHERE col > "aaa". We will introduce this design in details in the future articles.

Interested in this topic? Join the NebulaGraph Slack channel and talk to the community.